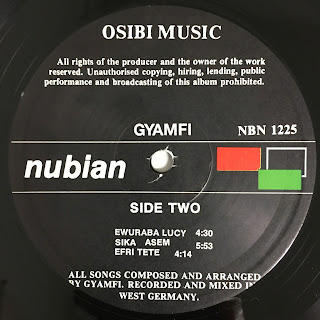 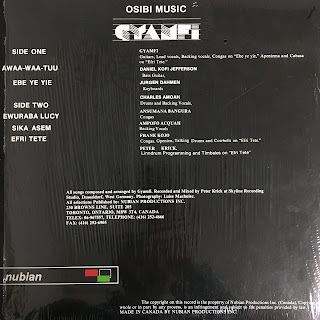 Recorded in Dusseldorf, West Germany with a mixed personnel of German and African musicians, this 1988 private press synthy highlife album is one of only a handful of known recordings by Ghanaian guitarist Rex Gyamfi.  Although likely also a German pressing (considering Gyamfi's other releases though no listing anywhere specifically), this copy was pressed in Toronto by Nubian Productions and perhaps sat in an African all-purpose store for years until ending up in a random 5CAD bin at a record fair there a few years where I picked this up – albeit taking me a few more years to realize its appeal and playing it out for the dancefloor, thanks to Invisible City unearthing stock of Gyamfi's other records and for their part creating a well of desire for 80s electronic afro and island dance records, prompting me to reapproach the random 'world' pieces I had bought on a whim with a new ear.  Not your average highlife here, with electronic drums, synth and a boogie feel, at its best fuzing programmed LinnDrum with organic African percussion where the playing of Frank Kojo and Charles Amoah - who each had their own now sought after highlife hits in the 80s - really shine.