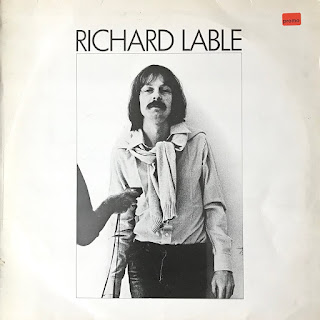 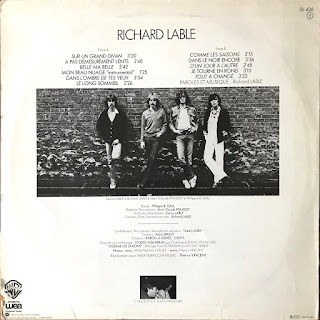 As a record collector/digger always searching for obscure wax gems previously undiscovered (which in the age on internet digging means not on Discogs, YouTube, or simply ungoogleable).  The thrill of successfully unearthing a previously digitally unmapped archaeological sound discovery that rivals long cherished records of the living collector/DJ canon is perhaps the defining act of any 'digger'.   Per usual, such discoveries are of the variety of [the now common selling point hype tags] 'rare and 'private press', usually pressed in a low quantity, perhaps only distributed among friends or from an artist/label that was an 'outsider' or simply defying sound boundaries, market expectations or geo-cultural prejudices of the time.

This 1977 self-titled album from Richard Lable meets none of the above criteria – and yet, this is release is perhaps the most 'lost classic' record I've come across.  On the major label Warner Bros. as it is, it's mind boggling how this French AOR jazz-rock fusion release wasn't a commercial and critical success.  Upon first listen, from the wistful nostalgia of 'Sur Un Grand Divan', it feels like you've heard this music before – in some light hearted dramatic soundtrack, a tender uplifting commercial or perhaps some classic rock radio station that never existed.  I can't think of a better time this could have been released: 1977, the year of Steely Dan's most famous classic Aja.  Lable's band vibes with some shades of Steely Dan, though much more subdued, stripped down and stoned, fuzing melancholic reverb chanson vocals and mellow electric piano with his brother Denys' southern rock tinged guitar, plus a nice dose of synth and percussion additions from French library veteran Teddy Lasry.

Perhaps had the vocals been in English, Richard Lable would've been saved from being tucked away in obscurity in the back stock bins for years – something unfortunately likely true for all to many albums over the last decades.  Denys Lable looks to have had a bit more success in the music business throughout the years, not so much from his own releases (though Crystal Hotel is perfect for those looking for late night city cruising Toshiki Kadomatsu-esque fusion, which also features Richard on some tracks), but as a session musician on a number of French releases.  In any case, I look forward to hearing Richard in some Sofia Coppola soundtrack or some sort in the future – or, for now, just accompany me through the car speakers on drives through the woods in morning light.